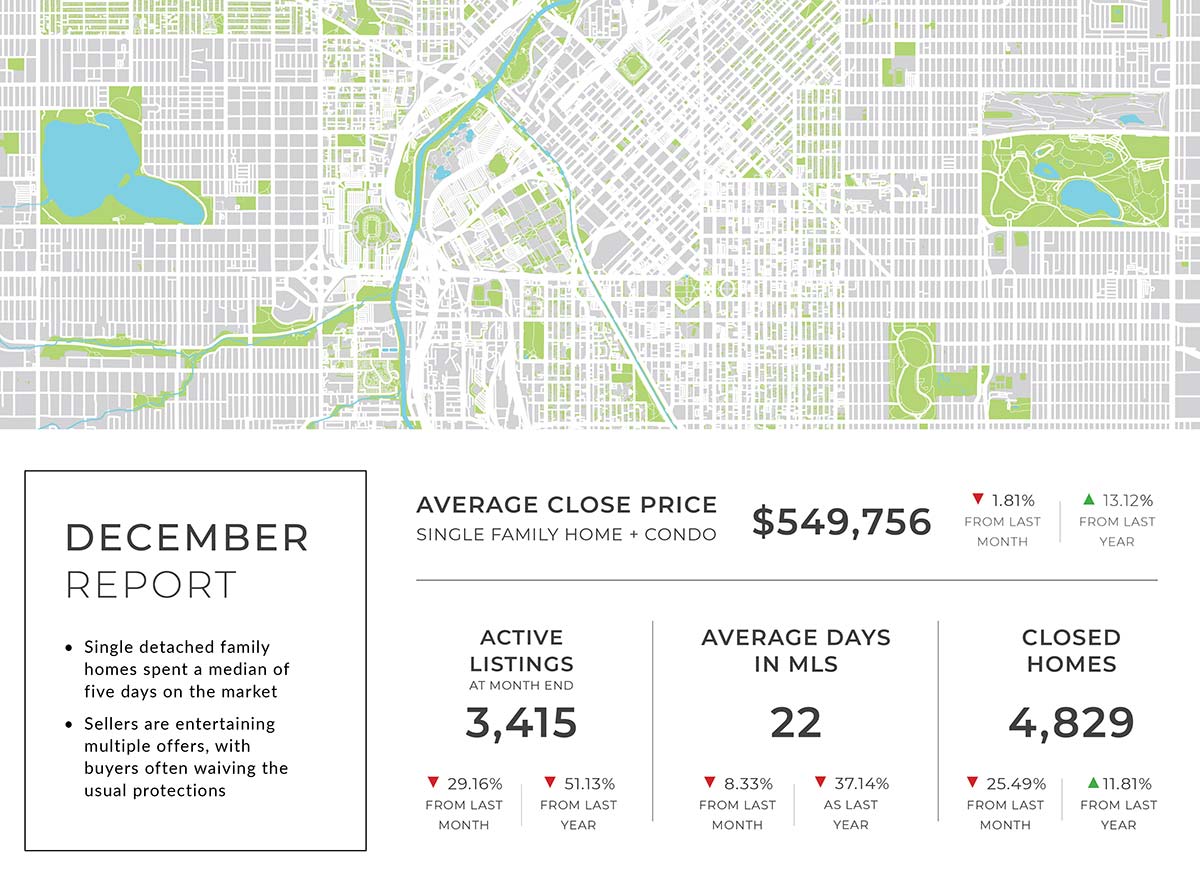 According to the monthly report from the Denver Metro Association of Realtors (DMAR), active listings for residential properties dropped to 3,415 in November—51.13% lower than last year at this time and even lower than the previous record low of 3,854, set in December of 2017. By comparison, the historical average number of listings in November is 14,488.

“Buyer demand is so high that based on the number of detached homes on the market and the rate at which buyers are scooping them up, it would take only about a week for all of the detached homes inventory in the Classic Market ($400,000-$499,999) to dry up,” notes Drew Morris, a DMAR Market Trends Committee member.

With such a paucity of options, it’s no wonder that homes flew off the market nearly as fast as they appeared. Single detached family homes spent a median of five days on the market. That number ties the lowest number on record, “having seen five days only five times before,” notes the report.

As the number of choices overall diminish, the DMAR report notes that “multiple offer scenarios are continuing later this year than they have in years past, and in price points where we have not been as used to seeing them.” Sellers are entertaining multiple offers, with buyers often waiving the usual protections, such as inspections.

For buyers to get a competitive edge, DMAR suggested they also consider paying some of the seller’s closing fees, such as the Owner’s Extended Coverage (OEC), the full closing service fees, the seller’s title policy and/or the transfer fees. Such fees, it notes, can add up, “leading to a winning offer.”

Buyers will likely find themselves continuing to strategize like generals as their mission carries into the coming months. Meanwhile, conditions on the field are ever-shifting.

“With record low inventory, buyers and sellers are asking myriad questions…,” wrote Chair of the DMAR Market Trends Committee Andrew Abrams in the November report. “When will inventory stop going down? Will interest rates ever go up? Will a vaccine change how buyers and sellers make decisions? When is a good time to buy or sell? If this year has shown us anything, it is to expect the unexpected.”