Which essential ingredient for home building is made here in Colorado?

Your rugs may come from Turkey; your kitchen appliances from Japan. But there’s one element in your home that is likely made right here in Colorado: your drywall.

OK, so the word “drywall” doesn’t exactly inspire excitement. Still, it’s a critical part of every home. And in a recent article in the Front Porch, Stapleton’s newsletter, James Hagadorn, a scientist at the Denver Museum of Nature & Science, lauded the role Colorado plays in providing this home staple. 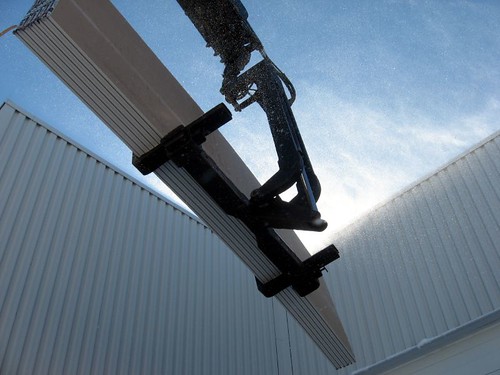 by  The Other Dan

The main ingredient in drywall is gypsum salt, which is mined in the state. “Gypsum has some unusual structural properties that make it like Mother Nature’s reusable glue,” writes Hagedorn, “mainly owing to the fact that if you heat gypsum, it easily bonds and unbonds to water and cures to a solid state.” This makes it perfect for creating drywall.

Colorado’s gypsum occurs in sedimentary rocks that were deposited on the seafloor 250-300 million years ago. It has been mined here for over a century, writes Hagadorn, mostly north of the Gypsum exit on I-70.

“There, a giant Zamboni-like machine scrapes nearly pure gypsum from the mountain. It is trucked to a football-field-sized plant south of the highway where it’s powdered, baked and mixed in a gizmo that looks something like a giant cake-mixer.” It is then pressed between two large rolls of recycled paper, where it’s dried and cut into drywall sheets.

Over 80% of the drywall at Home Depot or Lowe’s, says Hagedorn, is made in Colorado. In all, it amounts to a Made in America success story.

“So next time you’re chowing some Palisade peaches, mashing some Alamosa potatoes, or drinking some Petit Verdot, perhaps give a wink to this seabottom salt,” says the scientist.

Browse the newest Denver real estate listings below or click here to create your own search.