What is Denver becoming known for? Here’s a hint: Good things are brewing

by Chaucee Stillman | May 4, 2016 | Blog, Denver Activities, Relocating to Denver

It’s well known that Denver has beautiful mountain views, a lively cultural scene and a thriving economy. But here’s something you might not know about the city: Denver is also one of the best beer locales in the country. 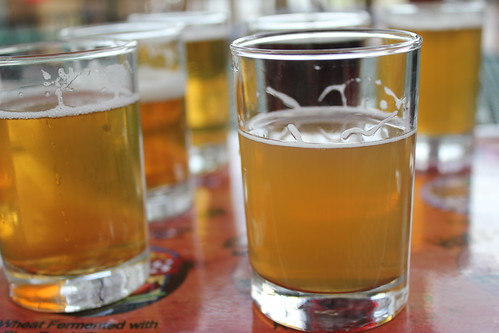 That’s according to a recent Forbes magazine article, which noted that the Mile High City boasts more than 50 breweries. And if you include the entire metro area, the number doubles to 100.

At least 16 new breweries opened just last year, with a variety that is worth toasting. One new brewery named the Fiction Beer Company, for example, features a literature theme, including a bar made out of books. But if writing isn’t the craft you crave, just head over to the Black Sky Brewery. There, you can listen to heavy metal music while guzzling your Black Sky brews.

Denver.org notes that the area between Denver, Boulder and Fort Collins is “often called the ‘Napa Valley of Beer.’” Not only does the region house Coors Brewery but also the National Brewer’s Association, which is headquartered in Boulder. Every September, hundreds of beer lovers turn out for the association’s Great American Beer Festival, held in Denver. There, they can sample more than 3,000 beers from 600 breweries across the countries.

That festival, by the way, isn’t the only beer fest held in September. The Denver Beer Fest, partly sponsored by the Colorado Brewers Guild, is slotted for late in the month, adding to the beer mania with beer bike nights, midnight beer breakfasts and a beer street party.

“Even politicians get into the act,” notes Denver.org. “[Denver Governor] John Hickenlooper opened Denver’s first brewpub in 1988 and at one point owned eight beer-centric saloons before giving them up to enter politics.”

Turns out there’s more brewing here than mountain views, after all.

If you’ve been thinking of tapping into the trend, you can drink in the city’s pub offerings by taking theme-based tours. Try starting your own Alphabet Club; gather a group of friends and visit a new brewery each week, starting with one that begins with an A and going down the alphabet. You might also plan your tour according to the style of beer you love best (sours, stouts and so on) or follow the Denver Beer Trail, an offering of 20 well-known and newer pubs.

To help you get started, check out this list of Denver breweries: http://denverbreweryguide.com/breweries.aspx