“Spite Houses”: Some homes are built to settle a score

Some homes are built to express a person’s dreams. Others? Well, they speak of dreams thwarted.

Built to settle a score, “their purpose is to annoy neighbors, create an eyesore, or thumb their noses at authority. Spite houses are built to [annoy] city officials or block a nasty neighbor’s sun, and are often awkward and impractical. When you’re that committed to being an irritant, function is not high on the priority list,“ notes the website Atlas Obscura. 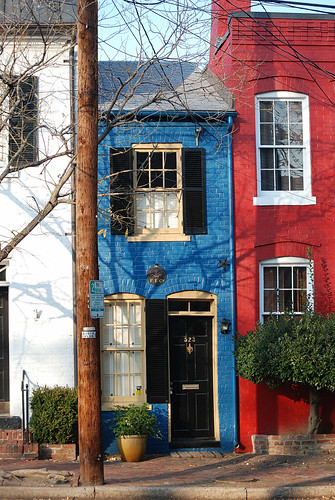 They are called “Spite Houses,” and you can find them across the country — oddities that are the visual equivalent of a bad punch line.

Take, for example, the super-thin home — dubbed the “Froling Spite House” —that rests uneasily on a corner in Alameda, CA. The builder’s goal, according to Atlas Obscura, “was to harass the enemy on two fronts. The growing city of Alameda had commandeered a good chunk of land from a Mr. Charles Froling with the intention of building a street, with the support of an unsympathetic neighbor. Froling had intentions for the inherited slice of heaven himself—a dream home which, when thwarted, Froling turned into an architectural nightmare.”

Using the tiny plot of land he had left, a vengeful Froling built his house anyway—20 feet high, 54 feet long, and 10 feet wide. Amazingly, the home has been occupied since its construction in the early 1900s.

While you might say the Froling Spite House was small minded, given its size, the Randall Spite House was just the opposite, a sprawling Victorian home set on a triangular plot of land in Long Island, NY. Developer John Randall had big aims: to thwart rival developers’ plans to build the city on a grid. The house went up virtually overnight, and the city was forced to divert from the grid to accommodate its presence.

For an amusing look at other Spite Houses, click here.